Discussions about the 20th Anniversary Edition
Forum rules
No cyber-bullying, no racism, no spam! Keep discussions civil and respectful or you will be banned!
Post Reply
8 posts • Page 1 of 1

I'm going to run a weekly game and was looking for anything people found helped run it via roll20.

We were hoping to make the leaping around from character sheets to maps, etc. a little less fiddly. I've got a lot of basic stuff set up in roll20, it's mostly down to how best to utilize it in the actual game.
Top

That's awesome! When I run online games, my players use the iOS and Android apps and just show their playmats on their tablets via the webcam (when needed).
http://www.fateofthenorns.com/WP/#133
I've also hacked the card deck mechanic in roll20 to have runic symbols rather than the standard deck of cards.

I know one group went crazy and set everything up in roll20, let me see if I can find the youtube video
https://www.youtube.com/watch?v=gCnqRwTLzXo
Found it!

Let us know how it goes!

I've been running a Roll20 game for a few weeks now. After a lot of trial and error and conversation, we've got down a pretty good system.

One roll20 game is just for playmats and rune bags. All players have GM level access for this game so that they can draw/shuffle/etc. runes from their individual rune bags. This is a recent thing we implemented and it makes things MUCH quicker. Before that, when we only had one roll20 game, players could draw cards from their rune bags but couldn't SHUFFLE them afterwards - which meant that it was up to me to do that all the time. That slowed things down a lot.

Oh, and the rune bags are just decks with the appropriate settings and rune cards. PM me if you want help with that.

Initiative can be clunky at times but in a perfect world (where there's no surprise or anything), we again use a Deck, which we then 'draw to' the Initiative tracker. 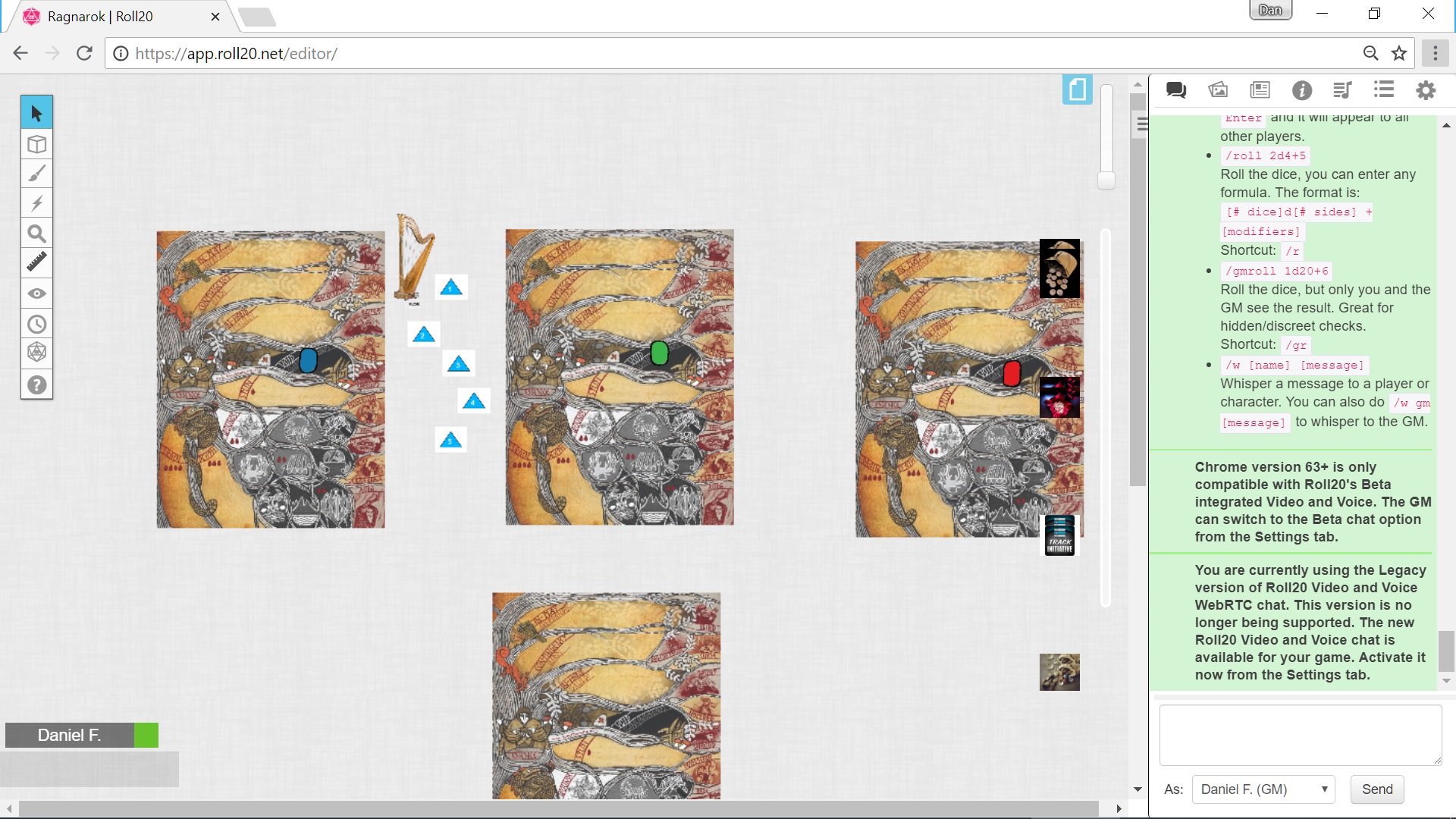 For the second Roll20 game, I am the only one with GM access. That's where we do our hex battles and such and where all of the actual handouts are handled. So while playing, we have the first roll10 game open (playmats) and then open the second INCOGNITO mode in Chrome for combat.
Top

The major feedback theme that I have received from other online Norns is that automation is lacking. "Shuffling" every players rune bag can be time consuming. Hopefully they can add those features, or an SDK/macros to do that in a more automated fashion.

You're the first person to mention initiative. What is the feature gap between tiles and a rolled ranking?

The problem with doing straight initiative from the deck is that you have a set number of specific NPCs/Dweller tiles. So you have to edit the deck EVERY time you want to change the number, you have to change the deck, otherwise you end up pulling tiles for people you don't need.

I sort of tricked the system by making a rollable table by accident. Basically, every time I want to roll a new initiative, I set the name for the tile in the table = abbreviation for a combatant then the next column I just set equal to x where x=1.. N, N = number of combatants. Then I open up an initiative thing and with hit "roll to turn order."

Hello, folks. First time posting here. I got to meet Andrew at Gen Con this year and I bought the Core Rulebook after he inspired me and my boys.

I am currently setting up the Saga in the back of the book on Roll20. I've managed to set up a rune deck and duplicate it for each player. I assume I just delete the runes they don't have from their decks.

After watching JarlDM's and Test3891's videos, I'm working out how to put my character sheets on the platform though I'm beginning to think it may be easier to make a form-fillable pdf and import them as an image. The playmats are working a treat though.

Anyway, any tips or tricks to make my game flow better are always appreciated.

I will be working on making a Roll20 Ragnarok Character Sheet Template in the near future, but sadly, that can only be implemented if you're a Pro user.
Top

For now, I've figured out how to post a homemade character sheet into the Bio area of the character journal. From here, I'll be copying the base character and altering it to fit the next one. It's not a smart sheet but at least it least it works.
Top
Post Reply
8 posts • Page 1 of 1

Return to “Fate of the Norns: Ragnarok”