Discussions and tips for Norns
Forum rules
No cyber-bullying, no racism, no spam! Keep discussions civil and respectful or you will be banned!
Post Reply
10 posts • Page 1 of 1

So, it seems to me that a lot of people here want to play online, but the tabletop softwares/apps aren't that easy to adapt to FOTN. So, let's share tips and tricks! 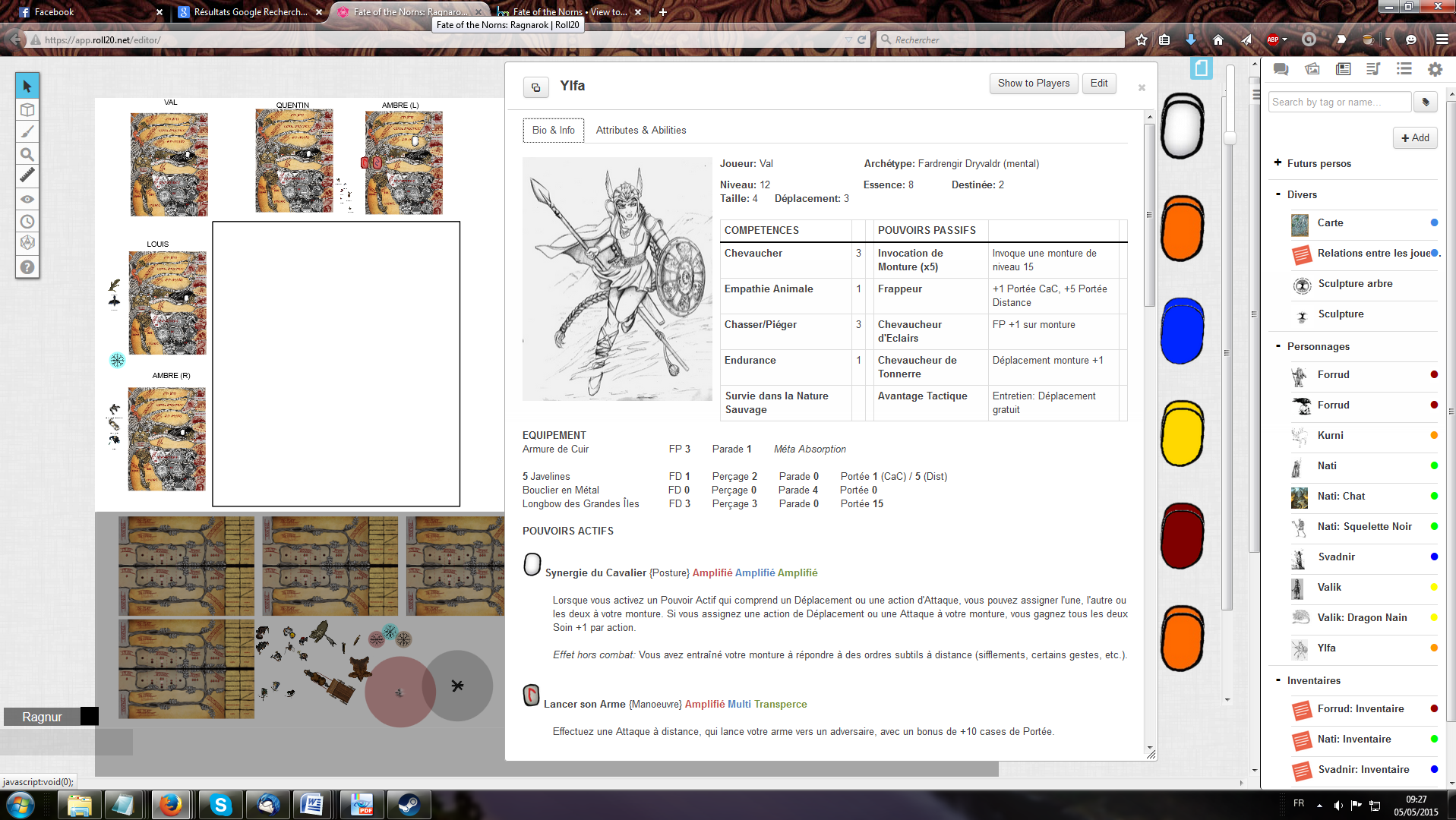 On the top left, playmats for every player, identified by name, and the Hex mat/battle zone in the middle. Each player can move his own token, apply auras, and so on.
On the bottom left, the Norn's corner: Denizen playmats, and lots of NPC tokens (some are not really Viking-like, but I didn't want to pay for roll20 token packs). Also, Alka tokens, to be copied and pasted whenever the Galdr wants to have some fun.

On the right, an example of Dweller sheet: avatar, equipment, Skills (we don't bind them too specific runes because combat skill checks are a rarity for us), Passives, and Actives with the corresponding rune and metas. Below that, there's also a table to sum up the character's background. Players also have access to a separate inventory sheet, that they can freely edit.

On the right also, rune decks. Easy to create, if a bit long, using the "cards deck" template. Every player has his deck, identified by color, and complete decks are in white, for afterlife/treasure/Norn Wyrds. Players can draw and move runes from the deck to the mats easily, and they just have to select and delete them to get them back to the deck. It's up to me to shuffle every deck between turns though, but it's not that big of a burden.

Add in the vocal conference on Skype (and the possibility to write to every player secretely), and we can play online almost as well as IRL

Ok, this is amazing. How did you do it? I've done the deck myself, but the rest was somewhat past my skill.

edit: ok, I did a deck or three, and I also did up a sheet, but it's nowhere as good as yours. I had the most problem with the playmats. Yours look incredibly small - do they expand? is this from a DMs view?
Top

They are quite big actually if you zoom in on the page, but I unzoomed to have everything in the screenshot. The character sheet's size stays constant. Here's a screenshot from closer up: 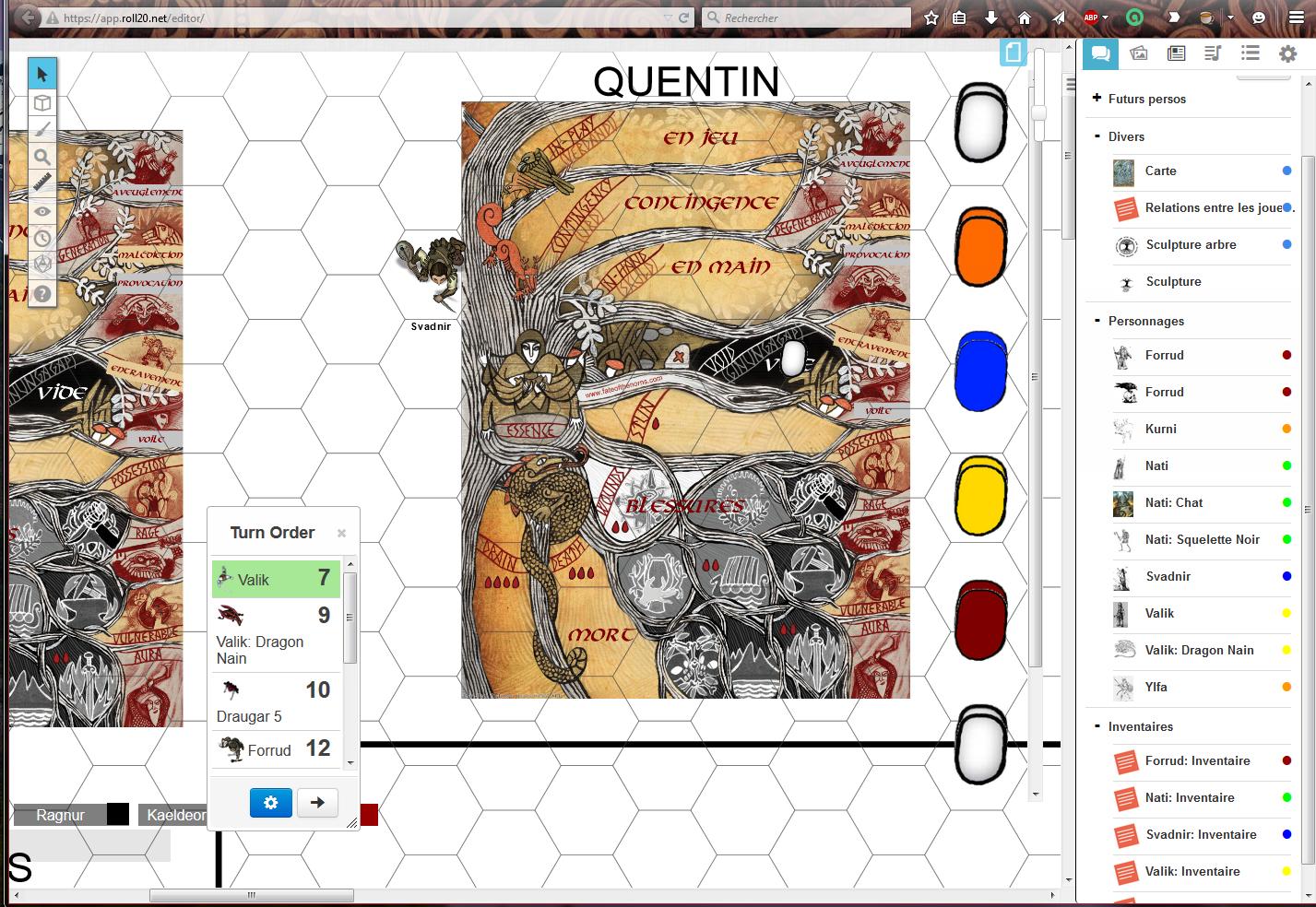 Ah, I think you see how you did that.

edit: let me guess, you pull them into the roll20 "hand" then recall only from hand.
Top

Even simpler: the player selects his rune, hits DEL. Rune goes away, DM shuffles the deck to make it reappear in it for the next Wyrd.

That is fantastic and completely unintuitive. But it amazingly works. That's awesome. Kudos to you for getting his to work.
Top

....now how do you export it for others?

We had a game up on roll20 in late 2013, a player took the time to create the rune cards and all, but all that effort seemed wasted when it couldn't be exported to the players to take home to their own games. I was training some Norns then, and they wanted the settings so they could go off and run their own roll20 games. I hope that feature has been added now.

I have no idea how to export it unfortunately :/ but I'll post the settings and other options so you can make almost the same tabletop

Do you have anything in the Attributes and Abilities tab? Any traction on posting your settings?
Top
Post Reply
10 posts • Page 1 of 1